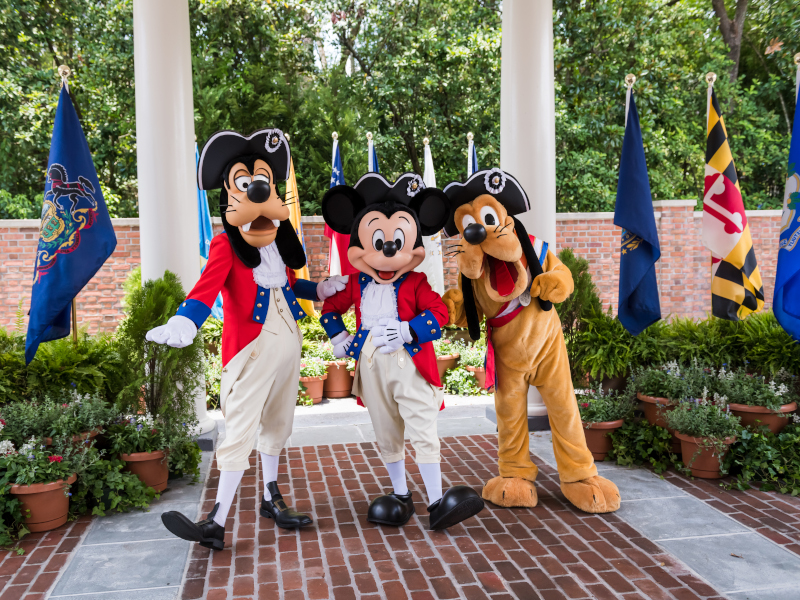 Sure, you can recite the Declaration of Independence, but do you know these five American Adventure Pavilion facts?

The American Adventure pavilion opened in 1982 with EPCOT, designed to tell the American story.

From early Native American artwork and the arrival of the Mayflower through the Civil War and up to the present day, history here culminates in a theatrical montage featuring the touching tune, “Golden Dream.”

With so much to see and do within the pavilion, it’s the perfect way to experience some “edutainment” on your next trip to EPCOT.

Take these five facts along with you, and perhaps find some inspiration to dig deeper into American history along the way:

1. It Took Five Years to Build 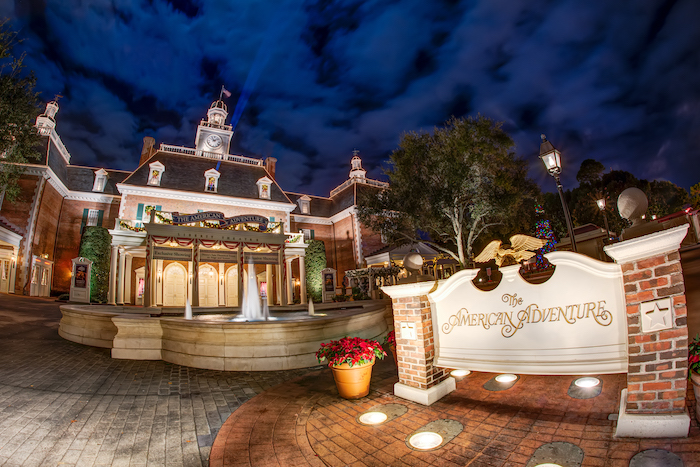 Stopping at home, in the American Adventure. Photo by Cliff Wang

The American Adventure was originally intended to serve as the host pavilion of World Showcase.

According to original plans, it would have been located across World Showcase Lagoon near the entrance to Future World.

The pavilion’s original design was more contemporary and would have served as more of a bridge between the park’s two lands. But ultimately, Imagineers went with a more traditional design reminiscent of an earlier time in American history.

The Georgian style mansion that houses much of the pavilion today takes its cues from various 18th-century American architectural icons like Thomas Jefferson’s Monticello, the Old State House in Boston, and Independence Hall in Philadelphia.

Like many Disney attraction show buildings, forced perspective is used, usually to make structures look taller than they really are.

But in the case of the American Adventure, Imagineers used it to make the show building appear to be shorter than it actually is to fit the architectural style.

2. The Preshow is All Around You 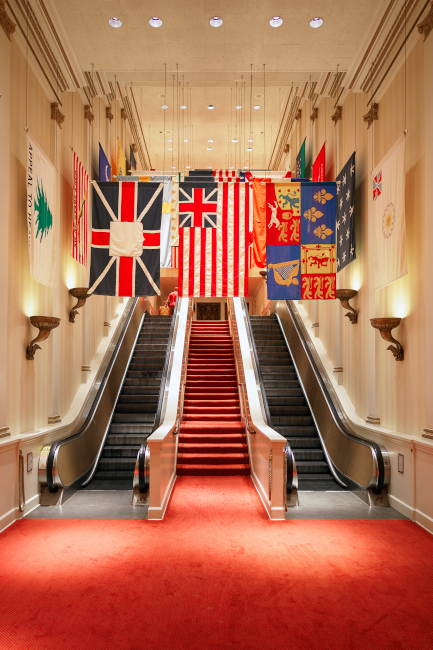 As guests enter the show building, they’ll find themselves within a dome lobby with Imagineer-created paintings and quotes by American historical figures.

To the right upon entry into the show building is the American Heritage Gallery, an exhibition space that is rotated frequently.

The pavilion’s paintings portray events throughout American history from covered wagons crossing rivers toward western expansion to new immigrants arriving by the Statue of Liberty.

Take a look at the paintings next time you’re inside the pavilion and see how many of the Imagineer names you recognize.

Once inside the theater, Guests will find statues representing the different “Spirits” of America on either side of the theater, including: 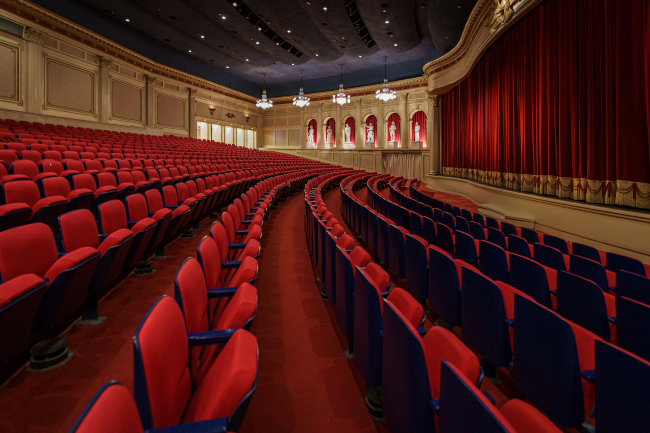 The American Adventure show is one of EPCOT’s greatest technological achievements.

The pavilion’s Audio-Animatronic show runs smoothly from beginning to end from Guests’ perspectives, but behind the scenes, a lot is going on to make the show function.

The audience area’s sloped seating creates the perfect illusion for hiding massive sets above and below the stages.

Some of the first intentional (and very well done) Audio-Animatronic movements are included in the show, such as Ben Franklin appearing to walk and him and Mark Twain shaking hands at the show’s conclusion.

The 72-foot screen serves as a backdrop for the entire performance, mixing hand-painted and Disney-designed backdrops with historic artwork and images.

4. A Blend of Real and Reimagined 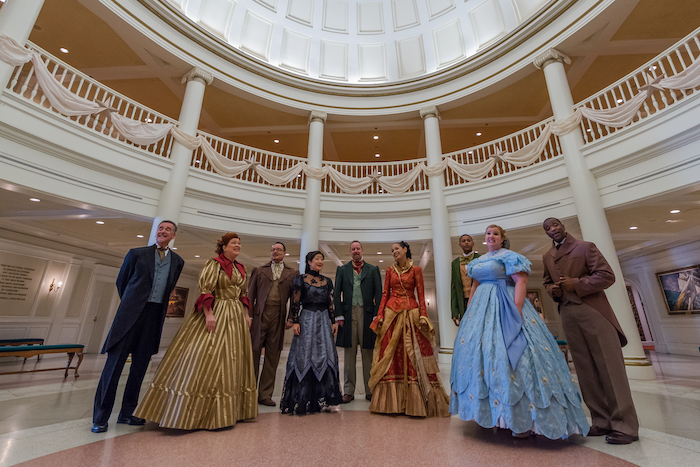 The Voices of Liberty at the American Adventure. Photo by Cliff Wang.

While some of the images shown in the show are authentic, others were recreated to fit the story.

The Civil War segment, for instance, uses authentic photos of the war alongside a funeral scene that was recreated based on a real photograph staged for the show at the railroad station in New Orleans Square in Disneyland.

Likewise, the World War II scene showing women working to support the war effort mentions Rosie. The Animatronic in question is a Disney-recreated nod to Rosie the Riveter; the model featured in government campaigns created to entice women to take on industrial jobs during labor shortages.

While not an artifact in themselves, the show building is also the home of the Voices of Liberty. The pavilion’s a cappella group covers American folk music, patriotic tunes, and even contemporary favorites.

If you are visiting during one of EPCOT’s festivals, you can also find the Voices of Liberty performing in the American Gardens Theater.

5. The Speeches are Authentic 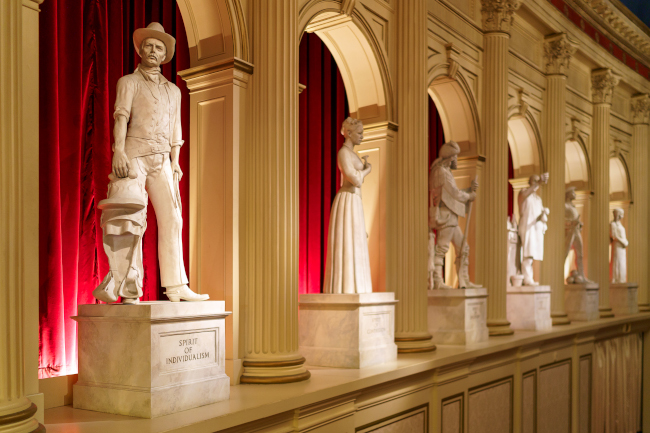 These statues personify the American spirit. Photo by Rich Ramos

The speeches in the show are authentic, and some are word-for-word to their real-life counterparts.

Many of the speeches heard during the show were not Imagineer-written but rather Imagineer-paraphrased from their real-life counterparts.

Susan B. Anthony’s monologue in the show is almost a word-for-word excerpt from the Women’s Declaration of Independence.

While not verbatim, Frederick Douglass’ speech in the show is heavily inspired by his 1855 Lecture on the Anti-Slavery movement.

Chief Joseph’s dialogue in the show is a heavily paraphrased version of his declaration of surrender in 1877 when the U.S. government forced the Nez Percé onto smaller reservations.

Conversely, when Franklin Delano Roosevelt’s voice is heard over the radio, stating, “The only thing we have to fear is fear itself,” an actual recording from his inaugural address is used. 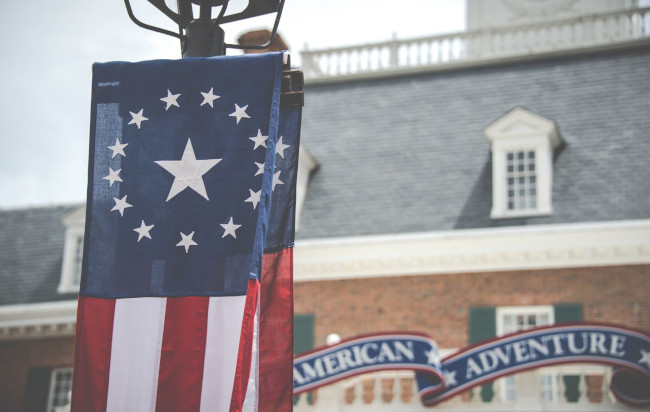 A colonial flag outside the American Adventure Pavilion. Photo by Judd Helms

In one building with a 28-minute long show, it’s nearly impossible to capture the entirety of the American story.

As such, we recommend arriving early for the show and taking the time to explore the pavilion’s exhibit galleries, paintings, and to catch a performance by the Voices of Liberty.

2020 EPCOT Festival of the Holidays – What to Expect 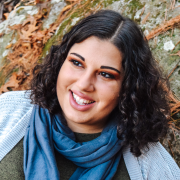