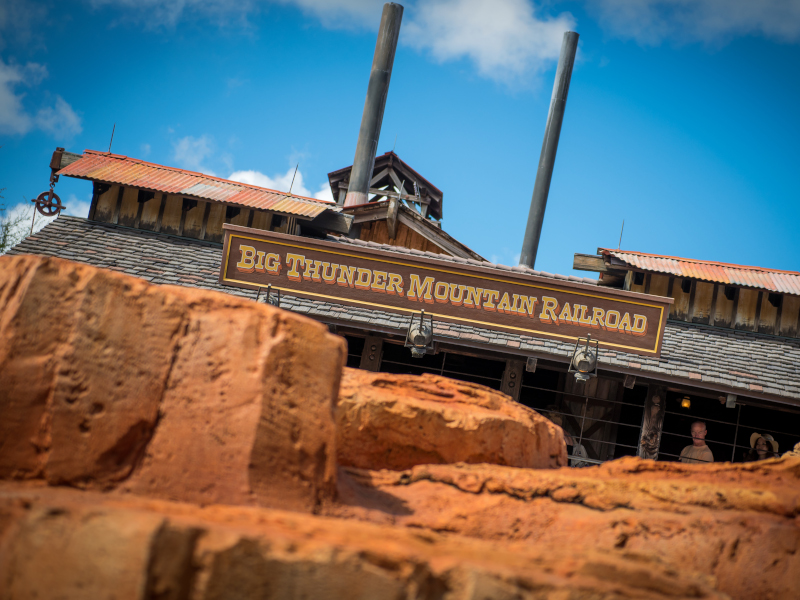 Frontierland’s famous train ride holds some fascinating secrets that you may not know. Check out these five explosive Big Thunder Mountain Railroad facts!

At the heart of Frontierland stands Big Thunder Mountain, a towering spire that reflects the mining heritage of the Old West. Even being one of the most famous rides in the Magic Kingdom, Big Thunder Mountain Railroad holds many secrets that you may not know.

Here are five of the most interesting Big Thunder Mountain Railroad facts to come out of the Tumbleweed mining town.

DO YOU KNOW THIS VOICE? 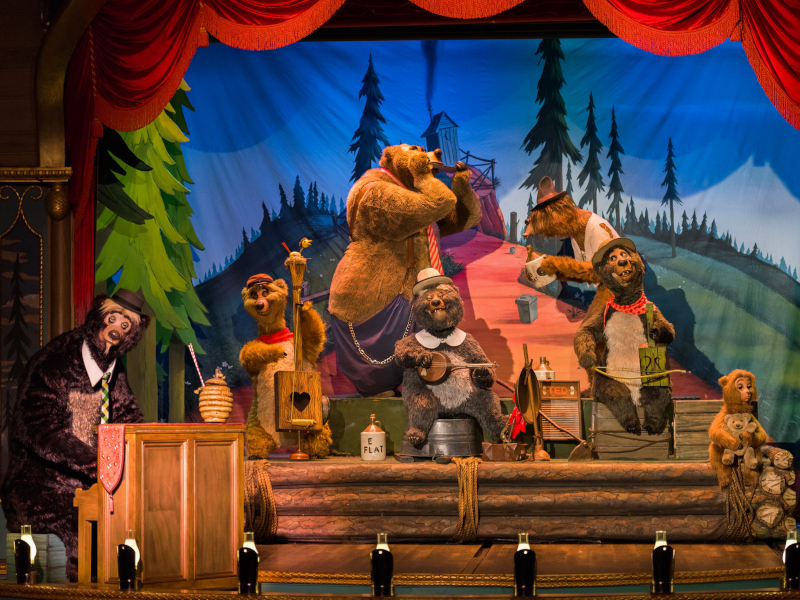 When you board the train to travel through the twisting tunnels of Big Thunder Mountain Railroad, a rambunctious prospector gives you spirited safety advice for your ride. This lively voice belongs to Dallas McKennon.

As a prolific voice actor, Dallas performed a lot of work for the Walt Disney company throughout his lifetime. You’ll see his name in the credits as the voice of various minor characters in Lady and the Tramp, Sleeping Beauty, and 101 Dalmatians.

His most famous roles were Art Clokey’s clay creation Gumby and the original Tony the Tiger.

You can also hear Dallas throughout the Disney Parks, appearing in EPCOT’s American Adventure as Ben Franklin and The Country Bear Jamboree as Zeke! 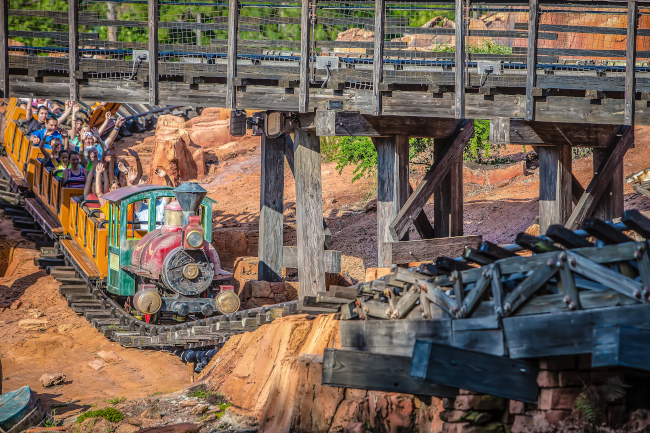 When you ride on the Big Thunder Mountain Railroad, you’ll board one of six different trains that operate on the line.

Each of the trains has a different name, each being a testament to your bravery for boarding this dangerous ride: U.R. Courageous, U.R. Daring, U.B. Bold, I.M. Fearless, I.M. Brave, and I.B. Hearty.

The next time you board the ride, see if you can spot the name of the train you’re taking through the mountain. Hopefully, it will give you some extra courage as you travel down the “dilapidated” tracks! 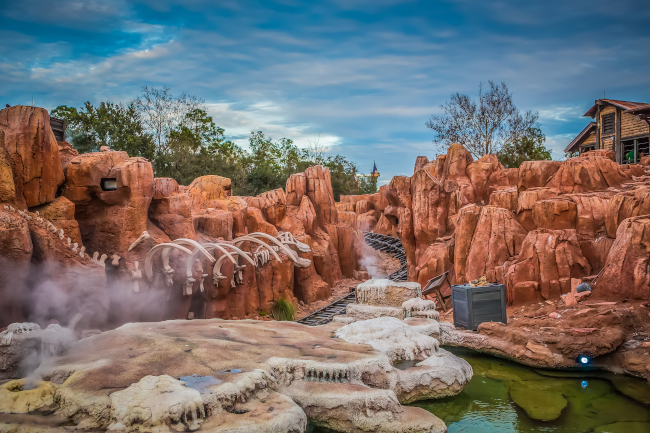 Like with other attractions throughout Walt Disney World, you’ll spot more and more hidden secrets every time to re-ride Big Thunder Mountain Railroad.

In addition to animatronic animals dotting the rocky landscape, you can spot an old man in a bathtub– if you look close enough.

Wearing pink long johns, this shameless old man is located near the side of the track during your ride. See him happily lounging in a claw-footed bathtub, which sometimes even spins when you pass by. Blink, and you’ll miss him!

If you’re on the lookout for hidden Mickeys, Big Thunder Mountain Railroad is harboring a couple of them. Look closely at the groups of cacti for the shape of his head. As you near the end of the ride, you can see three gears conjoined to form his signature silhouette. 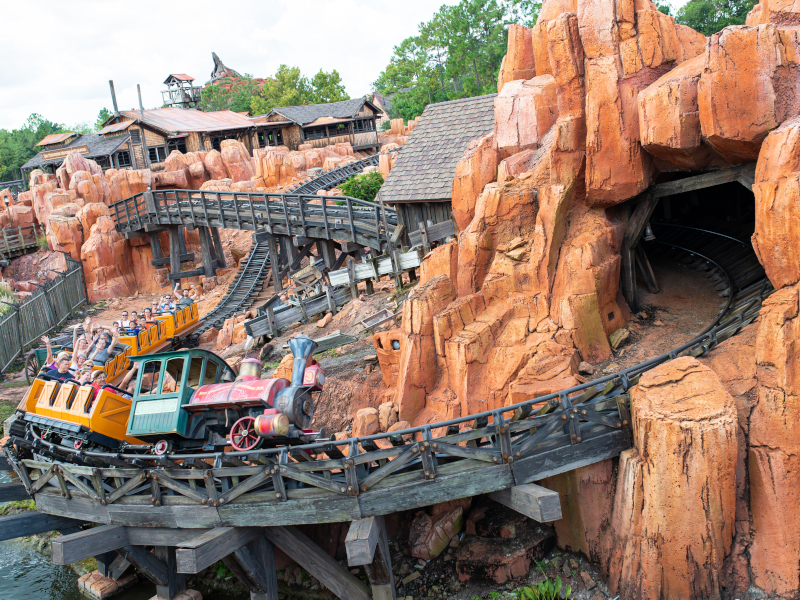 The entrance queue for this renowned railroad features many props and displays you can interact with while standing in line, the most exciting being a series of controls that activate explosives.

As you pass through the Explosives Magazine room, you’ll snake your way around crates upon crates of dynamite emblazoned with the label “Western River Explosives”, referencing the never-built Western River Expedition attraction.

Behind those stacks, if you look below the windows that open up to the mountain beyond, you’ll notice a row of nondescript cranks and plungers. These are actually detonators that will cause blasts of smoke and flashes of light to erupt along the track outside.

So, if you want to make fellow parkgoers’ rides more exciting, take a moment to detonate some (fake) explosives while you wait in line! 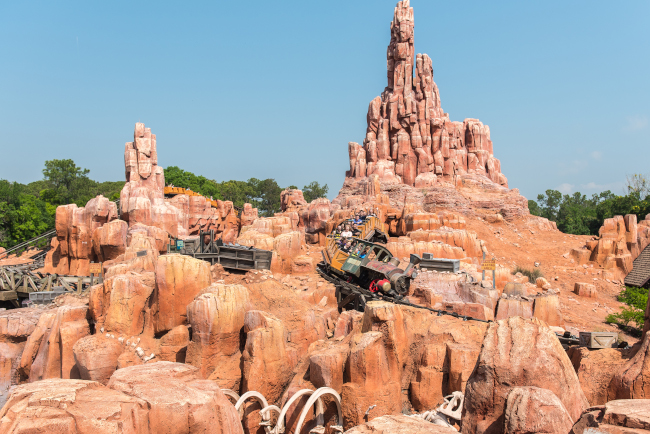 If you’ve ever traveled to Monument Valley, you’ll notice a clear likeness between the towering sandstone buttes out West and the concrete rocks forming Frontierland’s peak.

That’s because the design of Big Thunder Mountain was directly inspired by the famous red rock pillars on the Utah-Arizona border.

These were formed over millions of years of slow wind and rain erosion. Luckily, it didn’t take nearly that long to form Big Thunder Mountain!

Which of these Big Thunder Mountain facts did you know? Think we missed anything? Let us know over on our Facebook page!