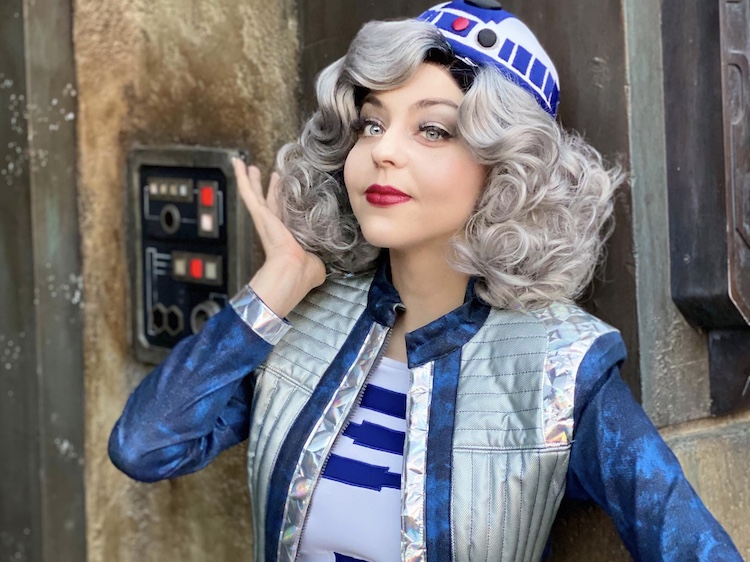 Above: Disneybounder Joanna Bert’s wig elevates her Disneybound to a new level! The Force is strong with this one! To get a great Disneybound wig, Joanna’s was styled by Jessica Mills at @jmillsmakeupandhair. Joanna’s dress was made by Connor Breen at @madhatterboy. Photo Courtesy of Joanna Bert

What I love about Disney is whether you’re five or fifty, there’s enough pixie dust for everyone! As Walt himself so perfectly put it, “Imagination has no age.” So that means anyone, any age can wear a costume at Disney World, right?

Wrong. It is prohibited for guests ages 14 and up to enter the parks wearing a full costume.

But for those of us who want to be a princess or villain the other nine months of the year, how can we do that, without getting turned away at the most Magical Place on Earth?

Keep reading for four secrets to wear a costume at Disney World… without really being in costume!

Cosplayer and Disneybounder Joanna Bert, pictured above in her R2D2 Disneybound, used a wig to help elevate her droid outfit!

What people don’t know is that wigs are totally allowed, and a great character wig can really elevate your ensemble! As much as I wish it were, Disney hair is not real hair.

Those big, beautiful bangs that are #princesshairgoals defy the laws of gravity and are difficult to recreate with one’s own hair.

Of course, if wigs aren’t in your budget, or you don’t feel comfortable wearing a wig, you can style your own hair too!

2. It’s Not Just About The Clothes

As a Disney cosplayer, I’ve experimented with what I can and cannot do when dressing up at the parks.

Most know about Disneybounding (creating an outfit that resembles the character’s aesthetic), but there are ways to take it to the next level!

It’s all about details. A great pair of shoes, accessories, and even makeup can give you the vibe you’re going for (if you want to achieve great character accurate makeup, search Google and YouTube!)

Get creative by accessorizing properly! A flowy green dress might make a beautiful Tiana bound, but what will really complete your look and make you the true man-catching beignet maker you are, is a tiara that resembles Tiana’s, and a lily pad shaped purse!

I personally love Danielle Nicole bags, her attention to detail really brings out that perfect pinch of pixie dust that will make your Disney outfit of the day shine!

Mickey’s Not So Scary Halloween Party 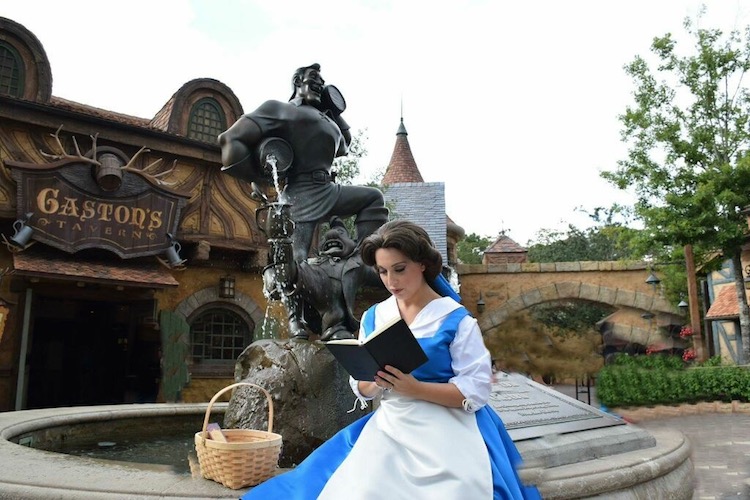 As Belle herself said, “Oh isn’t this amazing?” I was living out my childhood dream at Mickey’s Not So Scary Halloween Party! Photo by Esther Vallins

On party nights, all ages may attend in costume!

In 2016, I attended MNSSHP as Belle in her blue dress, and felt like true royalty! As I twirled my way through Fantasyland and passed Gaston’s Fountain, it took everything in me not to burst into the opening song from Beauty and the Beast!

I couldn’t help but wonder if the other park guests would join me in song, or declare me “a most peculiar Mademoiselle.” It’s a truly magical experience visiting Disney in costume.

At any Disney event where costumes are permitted, ensure you’re following their proper guidelines by reading their costume regulations here.

Aside from MNSSHP, there are other events throughout the year where getting gussied up is encouraged!

Dapper Day (an unofficial Disney event, but draws in over 10,000 guests) falls on two weekends in the spring and autumn, where guests use their own self-invented time machine to recreate nostalgic fashions of the 1950s when Disneyland first opened.

Attend Dapper Day and you’ll find a bemusing mishmash of families in matching T-shirts, alongside folks dressed to the nines with fascinator-adorned hair, parasols, and poodle skirts.

A note on heels: invest in a locker for the day when you’re not taking photos! 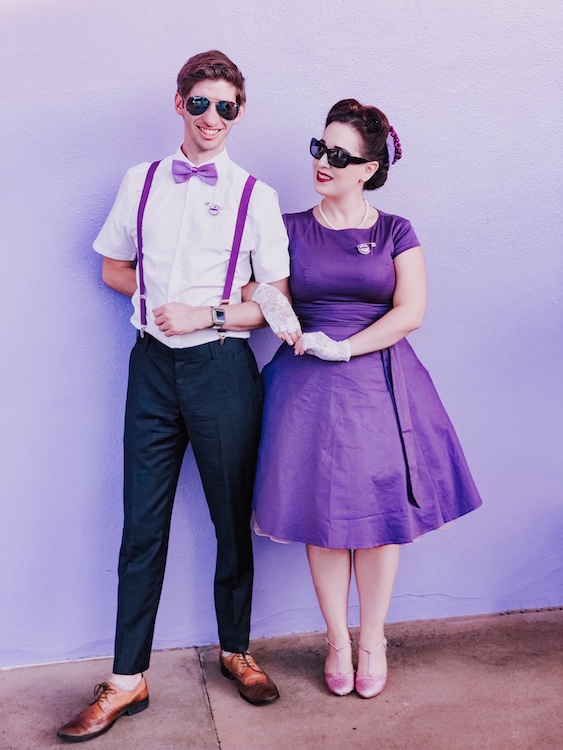 Our Dapper Day theme was inspired by the Grape Soda pin from Pixar’s Up! Photo by Esther Vallins

When I attended Dapper Day in 2018, one of my heels got caught in the grates in line for DINOSAUR at Animal Kingdom, and I needed help getting unstuck. I was a little embarrassed, but luckily, DINOSAUR is a dark ride, so not too many people saw my clumsy moment!

Oftentimes, Dapper Day outfits have a character inspired, costume-like feel. You can use Dapper Day as an opportunity to attend the parks in your throwback costume, and get creative too!

For example, if Hercules had been around in the 1950s, what would he have worn? (*Hint* probably not a toga!)

If you really want to feel like the character, study more than just their outfit!

Practice how they pose, smile, and wave. For example, Merida stands straight on with her hands on hips, while characters like Belle have one foot beveled, and an arm gracefully extended to the side.

Once your poses are perfected, map out photo spots that compliment your ensemble!

If you’re Mary Poppins, make sure to visit Prince Charming’s Regal Carousel, or the United Kingdom pavilion in EPCOT. If you’re Rey, then head to Galaxy’s Edge.

However you add the magic to your Disney ensemble, most importantly, make it personal to YOU! Perhaps you long to burst into song at Gaston’s Fountain like me, or maybe you want to be a Skywalker and use the Force at Galaxy’s Edge!

Would you like to wear a costume at Disney World? Which character would YOU dress as? Let us know over on our Facebook page!

Do you want more great Disney style inspiration like this? Be sure to keep up with our blog and subscribe to our newsletter!