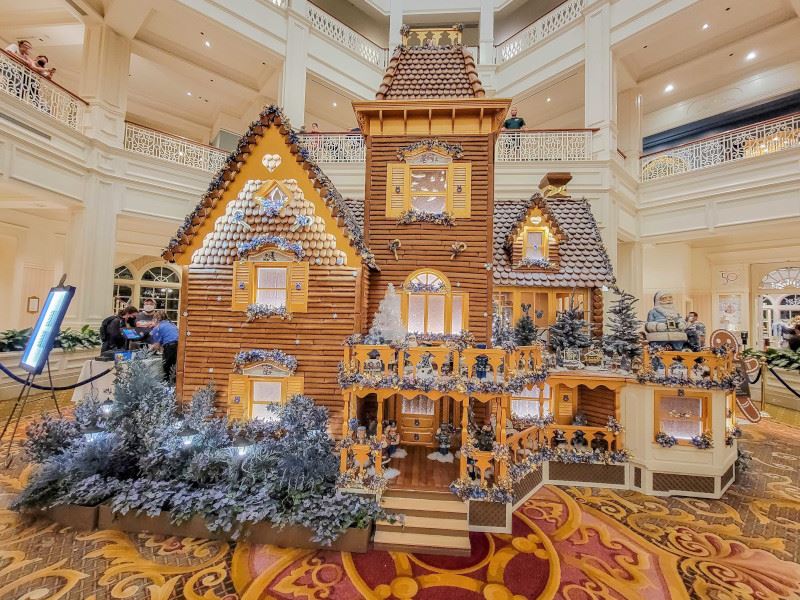 It’s gingerbread season! Learn where to find all of the amazing 2022 gingerbread displays at Disneyland, Disney World, and Disney Cruise Line.

Disney Parks are the place to visit during the holiday season. From the decorations around the parks to the ride overlays and parties, there’s so much to do and see! The sweet attractions not to be missed are the amazing gingerbread displays!

Both the Disneyland Resort in California and the Walt Disney World Resort in Florida offer amazing gingerbread displays and some tasty snacks that go along with them. Aside from being absolutely beautiful, the treats are definitely worth a taste.

Want to learn what’s coming to both the Disneyland Resort and the Walt Disney World Resort for the holidays? Here’s your guide to the gingerbread displays and snacks coming in 2022. 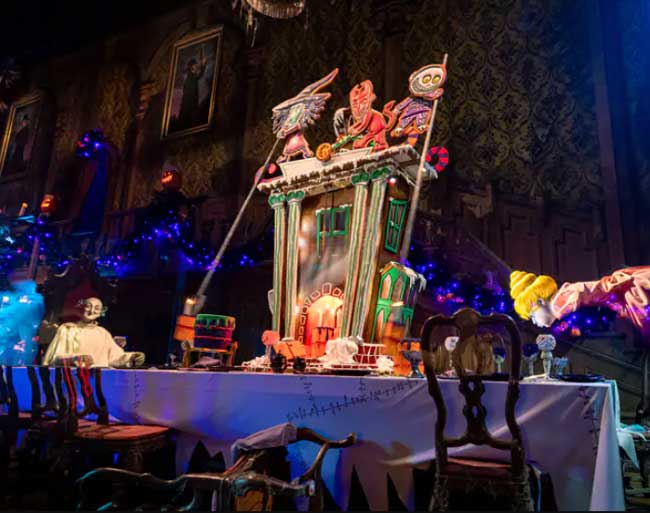 While you can’t pick up any snacks on the ride, you can admire the work of the pastry team who brought a 300-pound creation to life. Visit the Haunted Mansion Holiday before January 8, 2023, to see the magic. 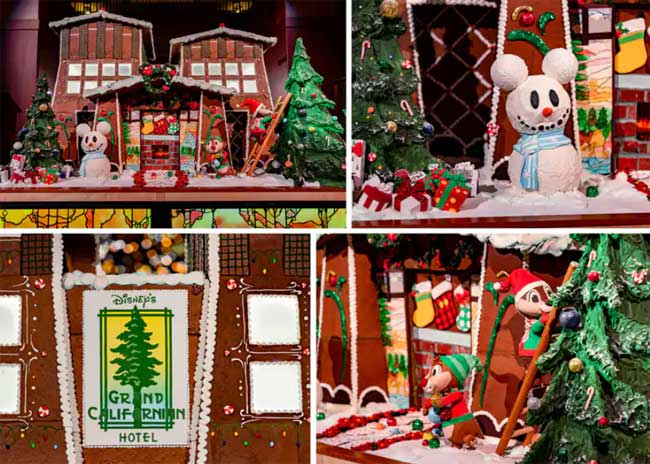 Disney’s Grand Californian Hotel & Spa will welcome a holiday favorite, the “Grand” Gingerbread House starting on November 14th. This giant gingerbread house is designed as a replica of the resort. It towers at a whopping 7 feet tall and 12 feet wide.

Plus, it’s made of more than 600 pounds of gingerbread, 600 pounds of powdered sugar, 250 pounds of fondant, 1 pound of pixie dust, and 25 hidden Mickeys! Can you just imagine how long that takes to put together?

As we’ve previously reported on the blog, the Magic Kingdom is getting some festive and delicious treats headed their way for the holiday season. But, they aren’t the only ones that can say they’ve “decked the halls.” 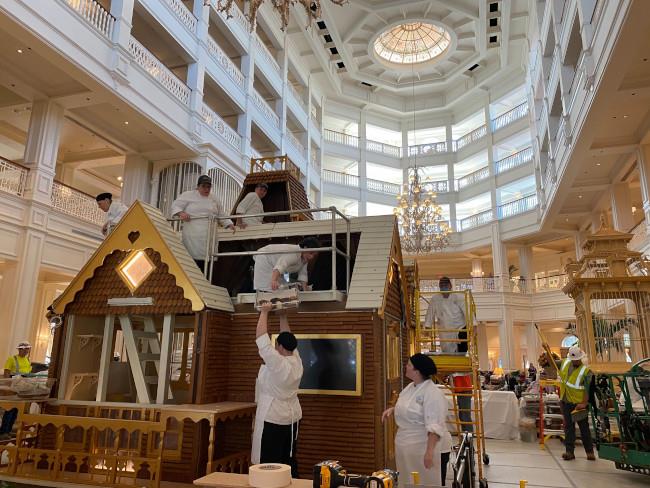 Probably one of Disney’s most famous and popular gingerbread displays is located at Disney’s Grand Floridian Resort and Spa. Enter a literal dream in the lobby of the resort starting November 9th, when a life-size storybook gingerbread house comes to life.

White chocolate, candy canes, edible snowflakes, and sugar poinsettias adorn the display making this something not to be missed. The colors and accents of the house reflect the 50th Anniversary of the WDW Resort.

Plus, be on the lookout for 25 hidden Mickeys! You’ll find an 85-pound chocolate Santa, nutcrackers, toy soldiers, and snowmen that were hand-painted- oh my! Talk about the work that was put into this display!

Starting November 23rd, guests visiting Disney’s Animal Kingdom Lodge will encounter a life-sized Baby Gingerbread Giraffe and Baby Zebra. These will be on display in the lobby of the resort, so make sure you catch a glimpse. 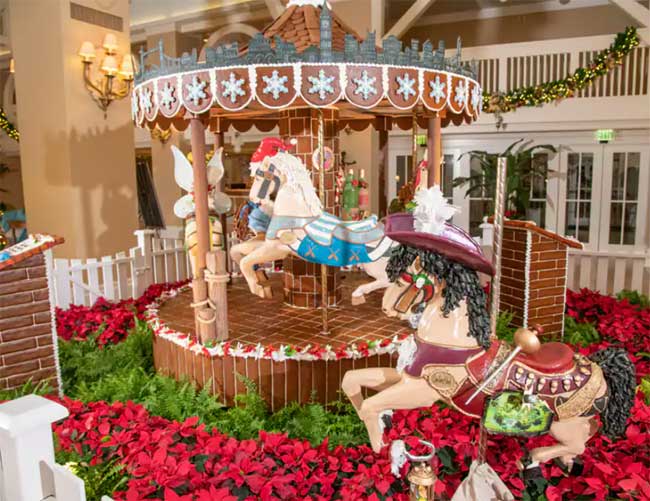 Another holiday favorite at WDW is the life-sized chocolate carousel that adorns Disney’s Beach Club Resort. Sugar, chocolate and fondant are brought to life by the Disney pastry chefs and are hand painted and sculpted for the display.

This year’s theme? The Disney princesses. It’s a unique display that shouldn’t be missed.

Have you ever wondered what Disney’s Boardwalk Inn would look like made of chocolate?

You’re in luck. Over at the lobby of Disney’s Boardwalk Inn, guests can catch a glimpse of a mini, gingerbread Boardwalk. This will return to the resort on November 17th.

After a hiatus, Disney’s Contemporary Resort display is back! This year, the team has created a masterpiece that will open on November 11th at 11:00 am.

The Cinderella Gingerbread Castle goes along with the resort’s theme and is Mary Blair-inspired. Plus it will feature 50th anniversary overlays.

Beginning on November 25th, EPCOT’s American Adventure Pavilion will welcome a unique display that represents some classic American monuments in America and EPCOT.

You’ll see edible versions of the Lincoln Memorial, Martin Luther King Jr. Memorial, The American Adventure Building, and a festival kiosk. How cool is that? 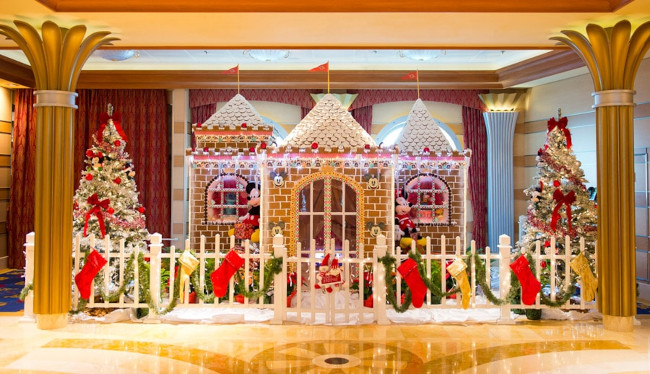 Do you feel like sailing the seas for the holidays but don’t want to miss the festivities? Don’t worry! All five Disney ships will continue with a display in the lobby handcrafted by the pastry team.

The Disney Wish specifically will feature an 8-foot tall, eight-layer masterpiece in honor of its inaugural season. Each ship features a unique theme for that ship and they even have a competition for the best house!

Jennifer Marrazzo is a writer and adjunct professor and knows way too many facts about Disney and cruises. She’s a DVC Member and WDW Annual Passholder and has a vast collection of Disney merchandise from Beauty and the Beast to Baby Yoda. Jennifer has her own blog, The Happiest Travels on Earth, where she offers reviews and tips for Disney and cruises!

Jennifer Marrazzo is a writer and adjunct professor and knows way too many facts about Disney and cruises. She’s a DVC Member and WDW Annual Passholder and has a vast collection of Disney merchandise from Beauty and the Beast to Baby Yoda. Jennifer has her own blog, The Happiest Travels on Earth, where she offers reviews and tips for Disney and cruises!